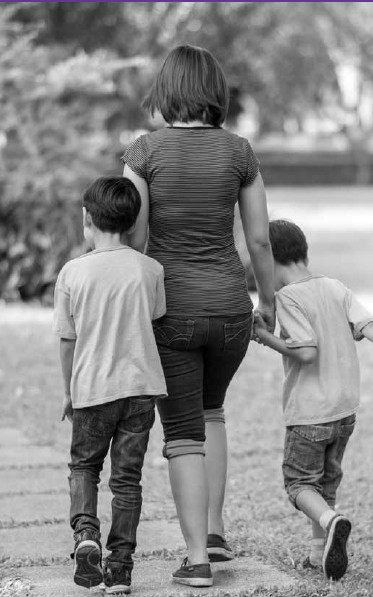 I started dating my first boyfriend at 19 and fell in love. He had a quiet charisma and gave me everything I wanted and made me feel so loved. On occasion, when he got mad at something, he would hit me. He always apologized and seemed so sincere — I thought that the hitting was just part of being in a relationship.

When we got married a few years later, everything was fine for a while, but soon the abuse started again, lasting for short periods before coming to a halt. I didn’t realize it then, but I now know it was a very typical cycle of violence. He would get mad at me about something — it was always my fault — he said I provoked him. The abuse would be quick but intense and then it would stop. He would apologize and buy me presents to show how much he loved me. He said it wouldn’t happen again.

The violence towards me escalated after my second son was born, and physical abuse now included verbal abuse. In time, this started to take a toll on me and broke me down emotionally. I started to believe the things he said. His rage continued and I started to take notice that the children were now being physically abused. My children and I were constantly walking on egg shells, not knowing when and how the next form of abuse would happen.

This forced me to find the courage to do something to save ourselves. I knew that I had no other choice but to quickly go somewhere far away. But where would I go? How would I be able to raise my children with only a part-time job? What if he came looking for me? Who would protect me and my boys?

Still, with all these unanswered questions, I decided to leave. I had made up my mind, regardless of the outcome. I took an unknown step forward and left the life of fear and abuse, hoping for a more peaceful one. That day at work, I called a shelter and they had room for me.
I was petrified; I didn’t know what a shelter was or what it looked like. I picked up my kids from daycare and we went directly to the shelter. This was the very first time in my life that I was completely on my own with three young boys. They depended on me for everything. I was terrified as I did not know if I would be able to take care of them and myself. However, I was determined to make it on my own since giving up and returning to the life of abuse would have surely put me in the grave.
That first night at the shelter I finally felt safe — it was the first time in 13 years I actually slept through the entire night. It was a new beginning — a turning point. I stayed at a shelter and received incredible support and counselling. Not only did they support me and my children in recovering from the trauma, but they connected me to local services that helped me rebuild my life.
That was 6 years ago! What once was a dream of hope and peace is now our reality. This is an accomplishment that I am very proud of and I would not be where I am today without the shelter and programs that saved my life.